The Success of the Biozone AirCare

The Key to Biozone AirCare's Success 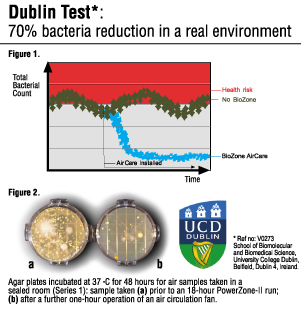 The key to the success of Biozone's purifying methods is the creation of a cold gas plasma, which is referred to as Purifying Plasma. Biozone’s Purifying Plasma is an excitation of gas by radio frequency energy - in this case, gases excited by the energy from ultraviolet light waves, which creates a highly energized gaseous state. The plasma, or highly energized gaseous state, is aggressive and highly reactive and contains excited atoms and molecules, ionized gases, radicals, metastable particles, and free electrons. It can destroy a vast array of indoor contaminants.

Biozone’s Purifying Plasma is mainly oxygen plasma created from the oxygen in the air. When oxygen is energized with light wave energy, aggressive and highly reactive plasma is created that contains positively and negatively charged atomic oxygen (which is just one atom of oxygen), neutrally charged atomic oxygen, ozone, ionized ozone, metastable excited oxygen and free electrons. In addition the hydrogen atoms are excited in water vapor and in organic material, which also react and combine with the oxygen atoms creating the radical species known as hydroxyl radicals.

The benefits of UV/Plasma methodology produce many advantages over other air purifiers that use only one method such as ozone. Commercially, ozone is generally produced by using high voltage electricity (corona discharge) or by ultraviolet light.

Most manufacturers of portable ozone generators use corona discharge which produces a very high concentration of ozone gas. These machines can quickly bring the ozone levels in a room way beyond the Federal Safety Limits and expose inhabitants to potentially harmful byproducts such as nitric oxide and nitric acid, both considered unhealthy to breathe. Further, the ozone generating plates used for the actual creation of ozone need constant cleaning and replacement.

While ozone is part of Biozone's Plasma, it is not needed in high concentrations for purification; the addition of other purifying oxygen and hydrogen atom and molecular structures allow Biozone to produce a most effective purifying device but without the hazards associated with too much ozone.